‘Breaking Bad’-Inspired Bath Salts Are For Baths, Not Snorting 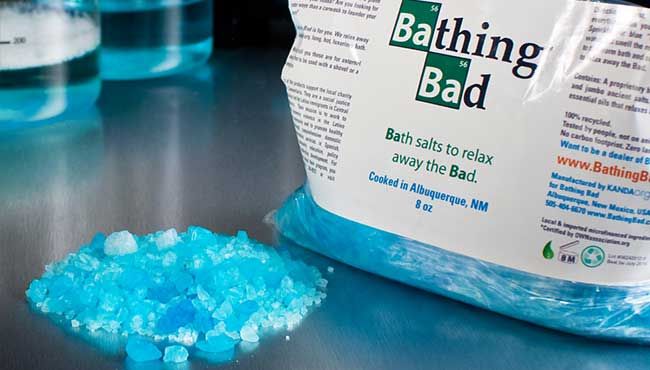 They had to change a step in the formula, but it’s just as pure.

Okay, this is cool as hell. Now, I haven’t had an actual bath in ages (cue the jokes, haha, it’s funny guys), but bathing connoisseurs – or women, I guess – use this stuff on a regular basis, apparently. Well, one particular bath salts manufacturer thought they’d be clever and tie in some of Heisenberg’s crystals, because here we are today.

Incorrectly targeted as the cause of a terrifying zombie-style attack in Miami last year in which a man ate another dude’s face, these bath salts are not designer drugs, but instead help you… hell, I don’t know. Bathe? Well, add in a Breaking Bad connection (see what I did there?) and a few of these “Bathing Bad” crystals to your wash and you’ve got some business.

Selling for $23, you too can recreate Walter White’s Blue Sky meth – and yeah, the bag even says it’s cooked in Albuquerque! Man, the novelty alone might be enough to kill me. Funny fact I didn’t know until just moments ago: the prop crystal meth in the show was actually cotton candy-flavored rock candy dyed blue. Madness.

Articles from Around the Web